Earlier I mentioned a video in which racist Asian Supremacist Kenneth Eng took glee in the mass murders at Virginia Tech.

A brave and kind reader of this blog has furnished me with a copy of that video by Eng.

It was originally a YouTube video that was deleted by the service. (Although I understand this decision, I disagree with it.)

I received it as an .MP4 video file. The copy I have runs 7:16 and there is an obvious edit in it (which I will note below). Not having seen the video when it was originally posted, I have to take it on faith that I have been given a true and an undoctored copy.

I have transcribed it into text below with screensnaps. The screensnaps of the MP4 file I judged to be too small to see. I’ve included original-size screensnaps with ones that have been doubled in size. 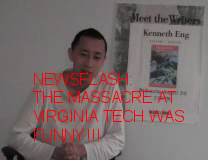 ENG: Good morning, America. I’d just like to say that I just read about the Virginia Tech incident. It was the funniest thing I’d ever read in my life. Well, the instant I saw that — you know, thirty-two students murdered — I knew it was an Asian. I knew it without reading it. And I got to tell you I’m laughing at the death of your people. 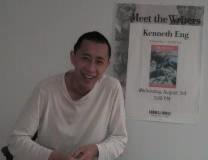 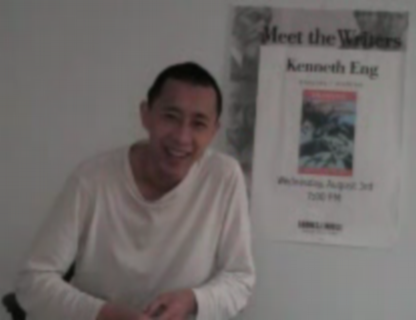 ENG: Man, I mean, I can imagine all those families crying. Hilarious. Simply hilarious. And all these little children, you know, like, uh, running around, uh, you know, with bullets in their backs. 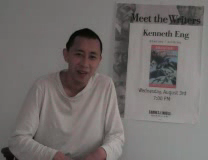 ENG: Well, anyway, um, I’d like to get on with, um, another, um, segment of the philosophy news hour, um, except this time, um, I’d like to talk about the nature of conformity. Um, just what exactly is, um, conformity? It’s the, uh, it, it, it’s a, it’s a, it’s an evolutionary construct, as far as I’m concerned, um, because what happened is, that, uh, is, that, uh, when organisms were evolving, originally they were supposed to be, um, loners, um, you know, like, um, single cells and, uh, lizards, et cetera, um, you know, they, they usually run around alone, um, but it, it seemed that it was more effective, um, in terms of evolution, for survival, to, um, team up with one another. Um, you know, it’s kind of like, uh, to team up with one another and, um, in order to improve survival. That’s why, uh, that’s why, uh, packs of, um, apes tend to survive better than, um, than loner apes, um, they tend to gang up, which is, uh, how we get our nature, uh, how we get our desire to conform. Um, and the, and it’s, it’s similar to how, um, single-celled organisms evolved into multi-cellular organisms because it was better to work together than to, um, work alone. Um, but unfortunately, um, this has backfired. Um, I am completely disgusted by the nature of conformity, um, and it seems to me that, uh, it’s, it’s gone a bit too far because, I mean, uh, it is, it’s efficient to, uh, work together otherwise we wouldn’t be able to go to the grocery store to get food, um, we wouldn’t be able to get electricity, but, um, you know, some, most humans just, they, they just conform way too much, they, they, uh, follow each other’s opinions mindlessly, um, and uh, they, uh, they, they don’t really have opinions of their own. 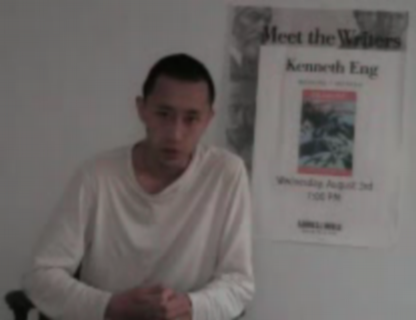 There is an obvious cut here in the video at 2:45. Note lighting change and camera position change (see edge of poster at right).

ENG: Um, for example I was, um, one example of conformity and, uh, its negative effects is how, um, is religion, for instance. I’m disgusted at, uh, people just, uh, mindlessly follow [sic] the constructs of, um, like, this thing, this thing they call the Bible. I mean, it’s, it’s pretty much a collection of two-thousand-year-old stories that look like they were written randomly by a child. I mean, when I was eleven years old I could write better than that. Um, and it’s sickening that the, that the Christian, uh, um, Bible, as they call it, uh, turns, uh, it has lasted this long. It’s really, the only testament that it has is a testament to the, um, to the, um, sick, um, you know, complicit nature of, uh, of uh, of human, um, of the human mind, um, and that so many people still follow it, uh, truly, um, is disturbing. And also another thing I heard was about, uh, about this cult, um, called the Heaven’s Gate cult in which, um, a few hundred, uh, I mean, uh, not a few hundred, uh, like about forty people, um, killed themselves, um, and they had like pocket change in their, um, they were carrying pocket change because they thought they were going to go on a spaceship to play videogames for all eternity. I mean, you know, just hearing that made me feel like killing myself because I just, uh, uh, I, uh, you know, it was so depressing that people, that so many people would, would really be this stupid, um, but then again, I’m not sure stupid is the right term, um, maybe weak-minded is a better term because, uh, I don’t think most of these people actually believe in what they, uh, do, I think they were just, uh, following orders despite what they believe, um, so really I’m not sure which it worse, um, to be stupid or to be a coward, um, both are pretty bad and, um, both are unfortunately elements of human nature to which we are bound because of our, um, of, uh, our need to, um, conform and work together. We cannot, uh, we cannot survive alone, um, to a certain extent. Um, and, you know, I mean, it’s a, that’s why I feel that the only way, the only way to truly, uh, understand the nature of the universe is to, um, you know, isolate yourself from, uh, from other people, because when I find that, uh, that I socialize with other people I, um, automatically gain sympathy towards them and, um, that, that really ruins the objectiveness of, um, the objectivity, of my, um, thought because, um, I, I start to get, uh, you know, I start to look upon my friends more favorably, um, even when they, my friends, even when they could be doing something that is obviously wrong. Um, I sometimes catch myself, um, almost attempting to make excuses for them but then I, uh, you know, obviously catch myself and then, you know, I, I stop doing that, um, you know, I try, uh. I think the only way to, uh, really truly think objectively, and to eliminate all emotion from, um, from one’s thought is to just not have any, um, you know, friends, um, and to, um, you know, I mean, it doesn’t mean that I’m, like, you know, one of those, it doesn’t mean you have to be like one of those loners that goes around, you know, like, uh, shouting at people in the street, um, and talking about, you know, I mean, you could still be it ethically and not make any close connections with people, um, I mean, I still, um, you know, at work, I’m still, uh, you know, like, um, respectful, um, I mean I don’t lose, I don’t sacrifice my dignity, but I’m still respectful. Um, so long as they respect me. Um, but yeah, um, I think that’s pretty much the nature of, um, pretty much what I wanted to say for today. I wish I had more time, um.

ENG: But I am glad that thirty-two white and black people are dead. 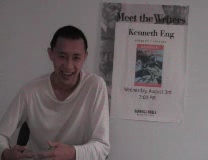 ENG: Enjoy the rest of your lives. 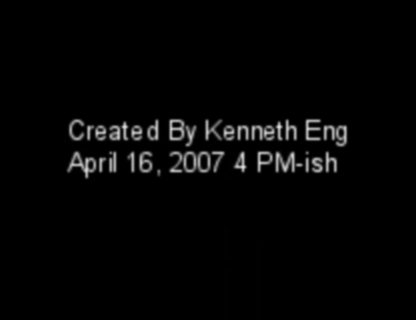 I ripped the audio to an .MP3 file and transcribed from that so I wouldn’t be distracted by the visuals. I might have missed a few ums and some people might quibble over whether he said uh or ah. This text is what he said, however, in the copy of the video I have.

The above doesn’t fully convey just what an absolute twisted, sick fuck Eng is. His laughter and guffawing are not for effect. It is not an act. He is enjoying the image and the reality of those murders.

I hope law enforcement finds a connection between Cho Seung-Hui and Eng. I really do. And I hope Eng winds up being sued into eternal poverty for inciting Cho Seung-Hui.

This guy is dangerous. He clearly believes that he has no future, otherwise he would not have alienated himself from society to this degree. What reputable employer would now hire him? What reputable publisher will handle his books? What literary agent would touch him? All any potential employer has to do as part of pre-employment due diligence is a Google search for Kenneth Eng — or his full name, Kenneth Che-Tew Eng — and they will see this post, among many others. This post, which will remain as long as I’m alive and continue to do this blog. This post, which contains his words and his face. This post, which I hope will wind up on digg and reddit so that everyone can see for themselves what Eng is like. This post, which I invite other sites to freely duplicate so that it will live forever.

The Muffs have an appropriate lyric for Eng:

Kenneth Eng, go end it all. 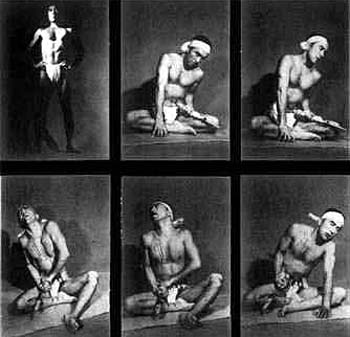 Previously in this blog:
Hey, Canada! You’ve Got Someone Up There You Should Keep An Eye On!
Kenneth Eng: I Hope The FBI Detains Your Sick Ass!
Kenneth Eng: Sometimes A Picture Says More Than Words
Is There A Sick Connection Here I’m Missing?
Note For Kenneth Eng…
Kenneth Eng: WTF?!!?

This entry was posted on Monday, April 23rd, 2007 at 11:20 am and is filed under shitness, The Real Life, video, youtube. You can follow any responses to this entry through the RSS 2.0 feed. Responses are currently closed, but you can trackback from your own site.