Originally, I planned to see M. Dylan Raskin at Barnes & Noble but when I saw there was no direct subway service, I didn’t think I’d be able to go.

But Richard Perez, author of the excellent novel The Loser’s Club, emailed me with two important points: 1) there was a connecting bus, and 2) the reason why this particular Barnes & Noble was chosen is because it’s Dylan’s homeground, the very area he wrote about in his two books! Perez even reminded me of the White Castle out there.

That settled it: I was going!

Every writer wants to go back to where he started and (at least figuratively; although in my case it would be more than literally!) thumb his nose at his detractors. I had to see this.

My God. It took just over two and a half hours for me to get out there.

While I was still on the bus (the slowest goddammed bus I’ve ever been on!), I glanced out the window and there it was: 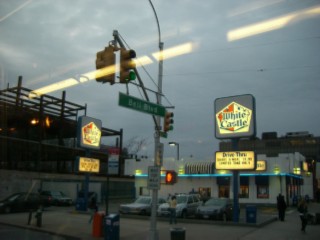 — the very White Castle Dylan mentioned in his books! Shooting through a filthy bus window, this is the best picture of it. Although the wee photo makes it hard to see, that street sign says Bell Blvd! This was exciting!

And then, finally, there was the Barnes & Noble: 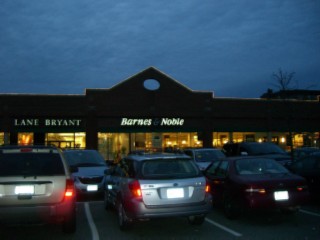 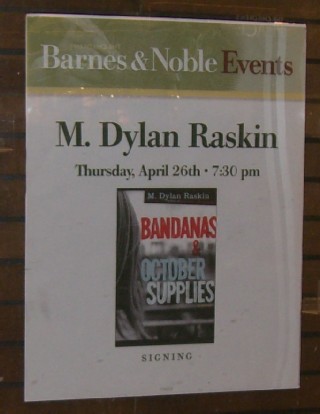 By the time I arrived, the reading had finished and people were already lined up for autographs! 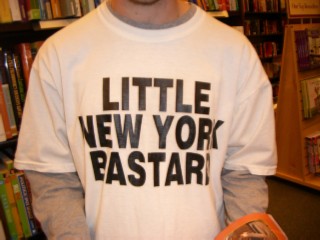 Dylan seemed to know many of the people who came to see him. Since he treated them all well, I can only surmise the cretins who infested the Bell Boulevard strip in his past travels had no idea of his presence (not that they’d be the kind of people who would read to begin with!).

I’d been so pressed for time this week, I never even got around to re-reading my own Raskin entries in this blog. And I’d also completely forgotten that his first book featured a photo of him on its back cover. I came having no idea what he looked like.

Well, here he is! 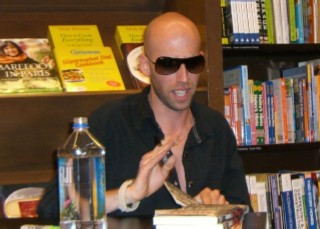 I got to speak with him for about ten minutes. Shockingly, his publisher had printed out my blog entry about his first book and sent it to him! He was pleased by it — he even remembered that I mentioned Morrissey in it! We had great fun ragging on that shithole most people know as Chicago. Writers love to bond over mutual hatreds!

Dylan’s a genuine guy. It was great to speak to him. No, sadly, he has not been to England (hello to his publisher: send him! Look at what being in England did for Bill Bryson, dammit!). He’s currently living in the locale mentioned in his second book. He’s contractually obligated to do a third book, but won’t begin until he’s lived the material itself.

Here’s what pisses me off greatly: Sales of his second book aren’t doing as well as his first. They should, dammit!

Listen, all of you Out There: How many times have you wanted to be able to gloat to your friends that you discovered a writer well before he became a huge success? Well here’s your chance! Go out and buy Dylan’s second book. Buy one for yourself, and buy one as a gift. Buy one for your mother, dammit. She’ll love it. No son ever had the dedication to a mother that Dylan displayed in that heartbreaking book. Mother’s Day is coming up; it’d make a perfect gift. Here’s the amazon link from the publisher’s page — they even offer gift wrapping! Is that convenient or what?

Charles Bukowski is dead. M. Dyland Raskin is not. Raskin will be, I believe, the Bukowski of the 21st century. But he needs more sales! Show his publisher that they should invest in him because you want to read his work! And you people in Chicago: You especially need to do penance, so I want to see the book sell out in your city. It’s the least you can do for him!

Despite missing an extremely-rare opportunity to see and hear Raskin read his own work, I was glad I went. All of you reading this should have gone too. I blame myself. I should have made the time earlier in the week to get the directions and tout them in this blog. By the time I got Perez’s email, I had just fifteen minutes to haul ass off of Satan Island and I’d already shut down the blog and the PC. Next time I’ll do better.

This entry was posted on Friday, April 27th, 2007 at 1:29 pm and is filed under books, greatness, idols, legends, reading, suits, writers. You can follow any responses to this entry through the RSS 2.0 feed. Responses are currently closed, but you can trackback from your own site.

One Response to M. Dylan Raskin Returns To His Homeland!