Damn. I Wish I’d Thought Of It!

Previously in this blog:
Death, Do Your Duty!

Cheap Is As Cheap Does, So Don’t Buy Cheap!

This is a followup post to one Steve inspired earlier: It’s Time To Stop Looking At Cheap Devices!

Its not only the 704 that has this problem either, many of the Windows CE-based devices, even those with the very good Opera browser, have issues with either processing power, plug-in support or simply screen size. Client-side processing requirement for browsing are increasing at a pace, browser real-estate requirements are also going up and when you think about the number of plug-ins and add-ons that are being written for x86-based browsers you wonder if the RISC-based app’s are ever going to keep up. Even the browser-focused Nokia N800 isn’t up to scratch. Flash video overloads it and Ajax or JavaScript-rich pages either cant be rendered or grind the device to a halt. There really needs to be a step-change in the processing power of these low-end devices before the complete Internet experience is possible.

Oh, so the N800 is just the latest version of The Biggest Piece Of Shit Known To Man after all! (Elsewhere, Steve reports on it being able to now play DiVX videos. Big Fucking Deal. That’s not what I’d first want an Internet device to do!)

When my LifeDrive is working again, of course I’m going to torment myself by trying web browsing via WiFi on it. It should drive me nuts. Then I’ll most likely stop using that part of it altogether. The LifeDrive will be my new PDA, a video player, and a pocketable text/word processor. It’s never been my intent to use it for web browsing at all.

I’m no longer looking at something cheap when it comes to being able to use the Internet. The Net has gotten just too damned big to try to shoehorn into puny-powered devices.

Yeah, Intel, I’m casting a doubtful eye your way too!

Death, Do Your Duty! 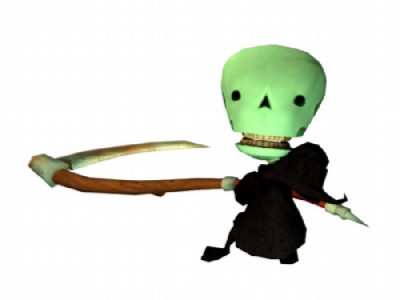 Numerous reports of Jerry Falwell being found unconscious and rushed to hospital.

(You think this post heartless? Then you’ve been duped.)

Produced and devised by Roberta Leigh
Directed by Arthur Provis

Two years later the same team created and produced “Space Patrol”. This episode of Sara And Hoppity appears in the Space Patrol box set and has been edited for YouTube.

Roberta Leigh is the woman who started Gerry Anderson down the path of puppet productions. Arthur Provis was the “P” of the original A.P. (Anderson/Provis) Films.

Jerry Andersons Terrahawks from 1983
The full length theme tune from 7″ vinyl accompained by some classic clips from the show…Edited by me…Well is was raining…haha!!

Richard Harvey‘s awful theme will make you truly appreciate the genius and artistry of Barry Gray (who would have done a better one by just humming into a cassette deck)! (To be fair to Harvey, some of the in-episode music was slightly better…)

1983 GERRY ANDERSON interview on THE TUBE with TERRAHAWKS

Jools Holland interviews Gerry Anderson on THE TUBE in 1983, about his career so far and to launch his new series TERRAHAWKS. Includes a rare look behind the scenes during filming.

Jools plays a sort of duet with Kate Kestrel on a miniature piano.

This interview was a rare chance to see clips from early series FIREBALL XL5 and SUPERCAR had been seen for many years.

Introduced by Muriel Gray with a hairstyle that’s definitely from twenty years ago.

Oh God! Mind Muriel Gray’s accent! It’ll shred your ears! Check out Venus dancing! And Zoonie the Lazoon (obviously the inspiration for Microsoft’s Zune brand! — which is now just as unpopular as its namesake!). Great behind-the-scenes glimpse of Terrahawks being filmed!

More Re: The Tyranny

The War on Common Sense — Just another 21st century witch-hunt

I would argue that the Big 3 Unwinnable Ideological Wars constitute an undeclared War on Common Sense. The War on Common Sense is designed to make the general populace believe that up is down, day is night, freedom is slavery and George Bush is a genius.

Previously in this blog:
Tyranny In My Lifetime!
There Had Better Be A Huge Outrage Over This!

Tyranny In My Lifetime!

Tomorrow the FBI will be able to wiretap all internet users

Cable modem companies, DSL providers, broadband over powerline, satellite internet companies and even some universities all have until the end of today to ensure “…the ability of law enforcement agencies to conduct electronic surveillance by requiring that telecommunications carriers and manufacturers of telecommunications equipment modify and design their equipment, facilities, and services to ensure that they have the necessary surveillance capabilities.”

See this earlier post: There Had Better Be A Huge Outrage Over This!

Like You Think Adults Who Eagerly Volunteer To Wear Pinstripes Daily Would Understand?

When gifted children try to share these concerns with others, they are usually met with reactions ranging from puzzlement to hostility. They discover that others, particularly of their age, clearly do not share these concerns, but instead are focused on more concrete issues and on fitting in with others’ expectations. Often by even first grade, these youngsters, particularly the more highly gifted ones, feel isolated from their peers and perhaps from their families as they find that others are not prepared to discuss such weighty concerns.

For in much wisdom is much grief: and he that increaseth knowledge increaseth sorrow. — Ecclesiastes 1:18

Ah, This Is Just Brilliant!

Sometimes I’m amazed at the creativity of some people who earn a good living filling needs that anyone could do. I was at a gathering today when I struck up a conversation with a man who described his job as a “commute helper.”

“OK, what exactly is a commute helper?” I asked

“I help people have a smooth and quick commute,” he replied.

Hmmmm… maybe I should inquire about the possibilities in NYC. Hell, I can sit on my ass like that for $.

As promised, we’ve started to roll out unlimited email storage to Yahoo! Mail users worldwide today. When it hits your account, you’ll notice the storage meter has disappeared — meaning, you just don’t have to worry about deleting old messages ever again!

In one way, this is a relief. My account was getting up there. But I still want to one day — one of these days! — go through my emailbox and do a huge purge.