You Must Hire Me To Stand In The iPhone Line For You. You Are In Grave Danger!

I’m very disappointed more people are clicking on About Mike Cane than looking at this. (Embedded Flash video.)

Really. You’ll laugh your guts out!

Previously in this blog:
You Know What I Feel Like After Offering To Wait For Cash Money In The iPhone Line?
Hmmm… iPhone Line Waiters Wanted? I’m Up!

OK, Here It Is. The iPhone Bellylaugh.

iPhoneSize.com — The Definitive Guide to Determining the Approximate Size of the iPhone

AT&T Says: You Can Buy Just One iPhone From Us!

I just got this in an email from AT&T:

Where Can I Get One?

With iPhone arriving June 29th at 6 p.m. in AT&T retail stores, the wait is almost over. Use our online store locator to find the closest AT&T store that sells Apple iPhone (limit one per person). We’ll show you maps, directions, and everything you need to get your hands on an iPhone as quickly as possible.

I don’t know from cellphone contracts and such (I have a Tracfone pre-paid piece of crap), but I recall seeing big ads in print and on TV from cellphone companies encouraging entire families to sign up for their service and get a bunch of phones.

What happens if a guy goes in and wants to get a few iPhones for his family? Does AT&T currently have customers with Family Plans who are going to be disappointed on Friday?

Will Apple Steal The eBook Limelight From Sony And Create Another Mass Market?

Microsoft gave the ebook market a shot with its Microsoft Reader (software that I actually liked using on my suicided Toshiba GENIO 550g PPC), then sort of lost interest.

Sony came on the scene with what I still consider the best damned piece of hardware and software for ebooks, The Sony Reader. But that Connect Store and desktop software ain’t no iTunes Store or iTunes software! (It is also worth noting that the desktop software is Windows-only!)

Now Apple will have a portable pocketable take-along-everywhere device in millions and millions of people’s hands in less than two days. Must I really say iPhone?

And Apple has the software and retailing advantage over Sony. Unlike Sony, it has made a success of selling videos.

I don’t think everyone wants to do nothing but listen to music, watch videos, or even access the web all the time. Two of those activities require headphones. The third — given the EDGE network — requires a bit of patience.

The missing element for the Apple iPhone is ebooks.

They are a natural for it.

And Apple is the natural company to finally break the backs of the print publishing dinosaurs and stomp down the current egregious prices for ebooks. Look at this front-page sample from the Sony Connect Store:

What is wrong with that picture? Everything!

Steve Jobs has the muscle and the vision to change that.

Are you listening, Steve?

Author Richard Perez — he did the excellent novel The Loser’s Club — sent this out in a MySpace Bulletin and I begged permission to run it here too:

My New Novel is almost there …. Almost…

I’ve been re-writing incessantly, usually during the nighttime hours. At this point, certain parts are more polished than others. I was smart in using the Bukowski technique of short, short chapters, which makes rewriting much easier.

How many drafts at this point? Hard to say. ‘Cause I started writing on index cards (’cause index cards are less daunting to fill than long sheets of actual paper, right?).

At first, I just meant to write an outline, but suddenly the voice of the main character (female, Latina: her name “Dolores”) just started talking, and I began to take dictation. The “confessional” took all sorts of wild twists and turns (some wrong turns too, which I’ve had to toss out, and roll back on, ’cause I wasn’t really “listening”) — 759 index cards later (front and back), I reached the conclusion.

This is definitely the best, boldest thing I’ve ever done (thank you, Dolores). For those who might be curious, it’s kind of a Thelma and Louise story set in the East Village, a story of two down-and-out “artist” gals who set out to make a “dirty movie” with disastrous results.

It’s absolutely filthy! Dolores talks like a female Charles Bukowski. And she tells the story straight up.

But it’s also about friendship, in a way. Female friendship, which has long fascinated me. For that, a reference point was “Heavenly Creatures,” the Peter Jackson film. I love the claustrophobic world that these two girls create; in fact, it’s so claustrophobic and unique, it’s psychotic (removed from “reality”). They literally create a tiny universe for themselves, an amoral universe, where even murder is fine if that means protecting the “real world” of their friendship. Add to that the fact that both girls are so young and inexperienced…. I love it.

Another influence on my novel is my newfound love of Trash Americana (tabloid culture) and exploitation cinema. I wanted wildness this time. Lunacy and a certain level of PC incorrectness. Those anti-hero ’70s flicks and movies like Faster Pussycat! Kill!… Kill!… and Coffy are certainly an inspiration. Women are allowed to do wild-ass things in exploitation movies, just check out “Big Bad Mama” and “I Spit On Your Corpse” and “Coffy” and “Faster Pussycat!”

Anyway, back to work now, back to my dungeon; I’m still not “done” …. I’d say I’m about 2 months away from polishing the book to completion. It seemed like the impossible project, in the beginning, and the whole time I was doing it, I was anxious and afraid. But I fought all through that (blocked out the negative voices), and it’s here now. I have it.

I am rubbing my hands in glee at the prospect of this book!! It sounds like another great novel! That will be two in a row for him!

iPhone In The Wild Pics

That wild and crazy guy, the one and only Fake Steve Jobs, had a link to them. See them here.

You See? It’s Not Just My Samsung Q1U Fondle!

Tech central have reviewed the Fujitsu UMPC and seem to be impressed with the little whipersnapper. There’s the usual shock at how tiny the device is and a genuine belief that the Fujitsu UMPC is a workable design. Apart from the fact that it runs Vista!

I wonder if vendors are starting to learn now that this is becoming a recurring theme. People get a UMPC, are impressed and then have to battle through the bloated, unoptimised disappointment of Vista. In almost every case, people are turning off Aero and having to start thinking about optimizations and its killing the customers first few minutes experience with the device. Can you imagine what the response to the iPhone would be if the software didn’t actually work out of the box. If you had to wait for an extended time for windows to open and if you had to start searching forums and asking questions to find out if your device was broken and why some other people are happy with the performance? People should be turning on UMPCs in an optimised state with an Origami Experience-style welcome.

I said just about the same damned thing but in non-journalistic, everyday (some would say gutter) language (which I will be using again in the next paragraph, so tune out now) in my follow-up fondle of the Samsung Q1U.

I got several emails from UMPC experts pointing out that I could “optimize” Vista. Fuck that. I want to do work, not dick around with the shortcomings of Microsoft’s OS. You think Jobs would ignore shit in the iPhone before its release and would cavalierly decree, “Oh, people can optimize it after they buy it” — and would then release something that when people fondled it would actively turn away potential purchasers?

And yet, for his perfectionism, Jobs is seen as a tyrant. Well, if Jobs is a tyrant, then Microsoft is a self-absorbed fat pig.

I’ll take a tyrant over a pig any day.

The Horror Of Allowing Comments

Look at this! Pogue got — at the time I’m typing this — 153 comments for a column about transferring a frikkin file. One hundred and fifty three!! Who the hell has the time to wade through all that?

Another reason I’ll never have all open Comments here.

Hell, even when I give you lot one, two, three chances, you don’t open your yaps.

So don’t complain that I don’t generally allow Comments here.

Two Days Before iDay, Has My Heart Been Stolen Away From The iPhone?

Steve aka Chippy over at UMPC Portal has gotten his mitts on a production sample version of the Raon Digital successor to the Vega, the Everun.

Rather than me drooling all over the place about it, go see his two videos about it. (Embedded YouTube.)

The iPhone has auto-rotate. So does the Everun.

The Everun can play Flash video and just about anything else you can put in Windows XP.

The iPhone … uh, can do a subset of YouTube videos…

Anyway, go look at the videos!

One thing I know for sure: Who’d want a Palm Foleo after seeing this baby?

–linkswipe via JK on the Run 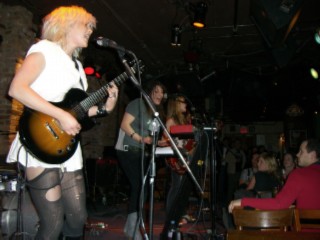 Congratulations to my five favorite Girls in the whole universe: the Girls of Girls Don’t Cry, who have been selected to participate in the Women’s Rights 2 Rock Women’s Music Festival taking place at People’s Park in Seneca, New York on July 13, 14, and 15, 2007. Three days, thirty bands, and free admission!

But what makes it worthwhile is Girls Don’t Cry!