The skies let loose with a billion tons of rain on Sunday, so Girls Don’t Cry didn’t get to play at the 25th Annual Quick Check New Jersey Festival of Ballooning. Major suck, that. Don’t get discouraged, Girls! You’ll have another huge venue soon!

Below are photos from their free appearance at Brooklyn’s McCarren Park on July 25.

Entering the main park area, I immediately come up two of the Girls… 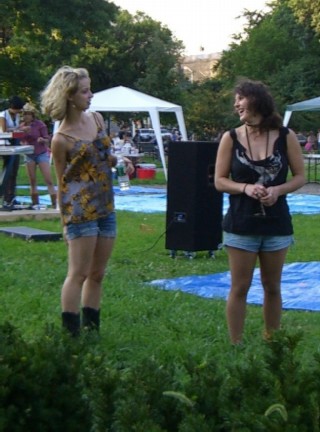 The Girls got there well before me and had already started their setup.

I see a cowhand with a guitar and wonder who the country music fill-in is!

The wee accordion Hannah plays during the Girls’ cover of Add It Up.

Some of the tools of the music trade.

Hannah shading her Chromatic Tuner with her father’s boots!

Liz giving me her special Go Away look!

Caitlin finds something exciting in the neighborhood paper…

… an article about Girls Don’t Cry appearing that very night!

I have plied the Girls with large apples to soothe them into being photographed!

A peek at the keyboards that Rachael uses!

The Girls relax before finishing their setup.

Then it’s back to work for final prep.

The sun shines on the Girls in more way than one!

Suddenly, everyone tells Hannah to freeze!

A butterfly has landed on her hat!

A peek at the sacred drums of Liz!

Liz is caught with her boots off!

Yes, this is how she works the drums! Stocking feet!

The poster for the weekly Park event.

The listing for the Girls.

The sound board that’s used to balance voices and instruments.

Rachael: “Let’s get this party started — oops, that’s Pink! We don’t do Pink!”

Rachael and Hannah are Go!

Liz, Sora and Caitlin are Go! 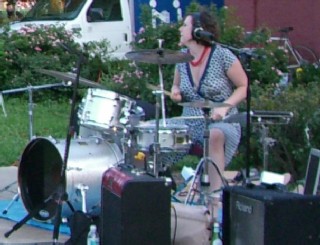 The Girls in full musical force! 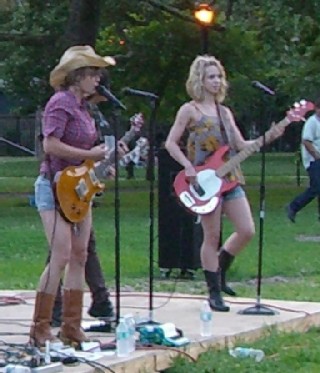 Hannah and Caitlin (Sora hiding in between!) 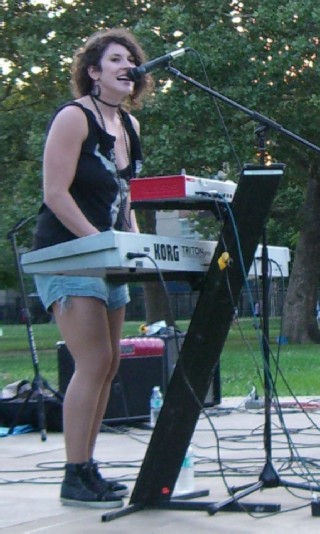 Hannah and Caitlin singing it out!

Aow! Rachael gets into the groove! 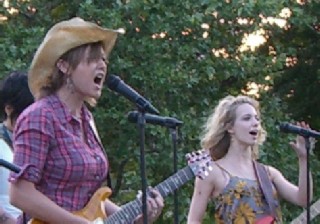 Hannah and Caitlin too! It’s a Girls Groove-a-Thon!! 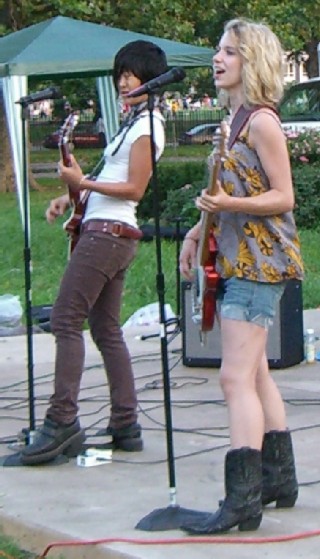 Sora shredding the guitar as Caitlin does vocals and bass! 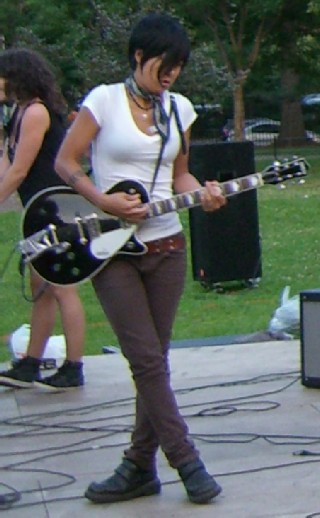 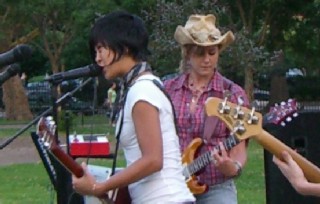 Liz on her drums! 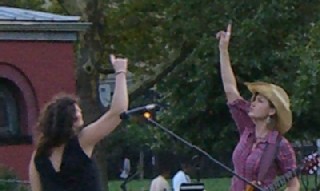 And that’s a wrap! Too soon! 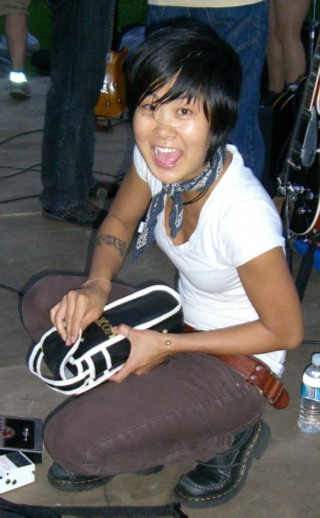 The aftermath. Too soon!

And Hannah’s drenched back says it all: The Girls play hard!

I had hoped to get real close photos at this event, especially since it’d be daylight and I wouldn’t risk blinding any of the the Girls with a flash. But… one of the Girls had a camera set up next to the sound board and it covered the entire front of the stage. I didn’t want to ruin the video, so I stayed well out of its range. As it turned out, I had to stand further away from them than at any of their indoor events! Ah well.

This entry was posted on Tuesday, July 31st, 2007 at 5:11 pm and is filed under bands, girls don't cry, greatness, legends, music, photos, social, The Real Life. You can follow any responses to this entry through the RSS 2.0 feed. Responses are currently closed, but you can trackback from your own site.