Oh Fuck Me! Junkiness Is Dead!!!

Also: We’re Not Ignoring You

There goes one sure source of laughs for me. Goddammit! I am being persecuted again!

Juliette Lewis Has A Band And It’s Coming To NYC! 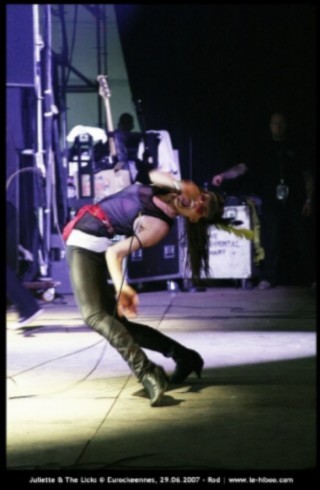 Juliette Lewis is one of my favorite actresses. No one can pull off the degree of sheer freakiness that she can. But she’s put acting aside for rock music. And she has a band called Juliette and the Licks.

They’re playing tonight in NYC at the Beacon Theatre, but I can’t make it. So I’m damned glad I’ll have even the possibility of a glimpse of her live tomorrow at the Virgin Megastore.

I will bring along the camera!

Perversely, I must start out congratulating NBC. Journeyman has not been leaked anywhere. I’ve looked! I’ve looked hard. (Of course, if it was your intent that it should be, maybe those who looked at it decided to spare the rest of us!)

I wouldn’t have ordinarily done such an intense dig, but I really really want to see that series. And since it seems everydamnedthing else is being leaked, I went looking. I mean, really looking.

And, Hollywood, you Suits better shut your mouths, drop your pants, bend over, and give the Unions what they want.

Or you are dead.

For in my search, I have discovered that just about every damned thing that can be digitized or ripped has been digitized and ripped.

And I do mean EVERYTHING. (Except for Journeyman, dammit. Yet!)

So if a strike shuts you guys down, people are going to start doing the kind of searching I just did. And then guess what? They will download and watch all that stuff for free. And as your strike drags on and on and on, they will become accustomed to doing that.

And goodbye to your business.

And, oh, if you think it’s P2P that’s the threat, you guys really have your heads up your asses. P2P is dead. The pirates and dealers in warez have reconfigured the game. There is no more P2P delay. Stuff can now be downloaded even with my shitty Roadrunner connection faster than it takes to watch the stuff.

PS: No, I didn’t download anydamnedthing. I wouldn’t watch that shit in a theatre and I won’t even watch it for free. And the TV stuff I wouldn’t even watch commercial-free. I’ve got books to read.

PPS: Leak Journeyman, goddammit. While there are people still interested in TV.

The band U239 sends out a MySpace Bulletin titled bombs, etc. and it contains exploding GIFs of bombs. With this addendum:

p.s. buy our shit on itunes. we’re tired of Ramen and Bubba Cola.

They then send out a second Bulletin titled I’m not making this up…, and it contains this illustration:

u239 describes their music as “Electro / Punk / Ghettotech.” isgro is my steez is the title of one of the cuts you can sample on their MySpace page. As if that wasn’t mindbending enough, their 7-song EP on iTunes is titled STAB||THE||KAT — and I hope that’s the name of the damned cat and not a call to action! (Because, for sure, this cat will fuck you up!)

Hey, guys, you have to wait in my MySpace Music Buying Queue! It’s not long, but it’s still a queue. But everyone else reading this should pop over to the iTunes Store to get it. Support indie bands — help kill the RIAA!

(By the way, having “u239” and “bombs” in one post on my blog is really gonna endear me to the netsnoops at Homeland Security! Thanks, guys!)

I’ve been informed by the band:

Isgro = a bakery in Philadelphia…Bangin’ cannoli’s.

Quote Of The Day: RoughlyDrafted

Is a quote from brother writer D.H. Lawrence. It was used in Kill Your Darlings, a novel you should read written by Terence Blacker.

Lawrence also said — or perhaps wrote — these wonderful things too:

Be still when you have nothing to say; when genuine passion moves you, say what you’ve got to say, and say it hot.

Goddam, how many blogs would go dark tomorrow if they followed that advice?

The essential American soul is hard, isolate, stoic and a killer.

I am in love – and, my God, it’s the greatest thing that can happen to a man. I tell you, find a woman you can fall in love with. Do it. Let yourself fall in love, if you haven’t done so already. You are wasting your life.

But better die than live mechanically a life that is a repetition of repetitions.

If a woman hasn’t got a tiny streak of harlot in her, she’s a dry stick as a rule.

Well, that one woke me up!

Ethics and equity and the principles of justice do not change with the calendar.

But the con artists who pervert them for their own needs damn well do!

Quotes ripped from thinkexist.com and The Quotations Page.