Dumbass Of The Year: Ed Colligan

Wow. Look at me with Bill Gates!!!

We are so good!

Previously in this blog:
I’m So Bad, I’m Good
If We Can’t Have Momentum On This, Can I At Least Get An Amen, Brother?
Newsflash! Pictures Of Corpses Left In Wake Of iPhone Price Cut!
Palm Kills Foleo
OK, Now The Foleo Scares Me
Ugh. Backlogged. Still.
Poor Ed Colligan. Ascared Of Me.
Engadget Snags The Attention Of Autistic Palm, Inc.
iPhonespotting
Oh Look! I Get To Bash Palm And Nokia At The Same Time! It’s Two Two Two Hits In One!
Palm Flogs Blog, Flails, Fails
iPhone Vs. Palm Treo: You Can’t Fight A Corpse
Microsoft, Palm, And Nokia: You Better Be Freaking Out!!
Failure Has A New Name
Treo-Skimming. A Post-iPhone Craze?
Record Blog Traffic: Apple iPhone Vs. Palm Foleo
Earth To Palm: Change The Foleo’s Browser To Safari
What Foleo 2.0 Needs
If FSJ Says It, Then It Is So!
Oh My God! What Did We Buy?!!?
Prediction: Palm To Drop All Handhelds
LifeDrive Notes: Should Palm’s Software Engineers Be Beaten With A Spiked Bat Or Tied Up Together And Dumped In The Ocean From 30,000 Feet?
Palm’s Flopeo, Uh, Foleo: Best Other Name For It
A Picture Of Two Tech Devices That Should Have Never Been Released
My Reaction To Palm’s New Foleo Device
On A Day When Palm Gets Everything Wrong, Apple Gets It Right

Blog Notes: I Know You Want It. And I Want To Give It To You. Really!

Unlike a certain company which has changed its product menu (see above) and which has — as ProFoleo puts it — done a “first-degree murder of the Palm Foleo,” I am still going to get those Foleo posts done and up here.

The stuff I put up here today I had to get done, to clear out backlogs and update past posts.

And even with that, I’m still massively backlogged.

I will pound the keyboard tonight. Really. But I make no guarantees for posting tomorrow. Maybe Sunday, if not tomorrow.

In the meantime, enjoy today’s last post, right above this one.

I find out from PIC that Palm has dared to put a new post on that pathetic thing they call a blog:

There’s been a lot of buzz about the new device our friends across the “pond” are planning to announce on September 12th…and it’s not the Palm Centro smartphone!

Check back later for more info.

Can it be Ed Colligan’s resignation?

Oh of course I know they’ll never publish it. But I still had to give them the jab.

Hmph! And look at that: she admits there is a Centro and that its name is Centro.

Then it’s true: Palm has gotten so desperate it’s orchestrating its own leaks. Gone are the days when people wanted to know in advance. Now, we’re really afraid to know.

(Although when it came to the Foleo, the wrong advance info was planted. And it all backfired.)

Previously in this blog:
If We Can’t Have Momentum On This, Can I At Least Get An Amen, Brother?

There are some sick people on the Net.

Some eejit called billg sent me an email with two pictures and one question:

Don’t you see the resemblance?!!? 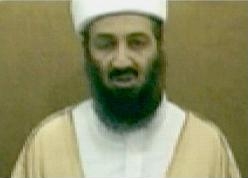 Fake Steve Jobs is still dead to me. 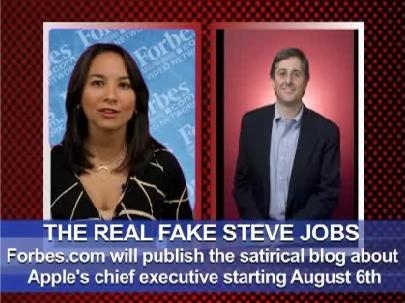 Because he’s a brother writer, goddammit.

Even if, jaysus!, he’s got a fucking suit on him. 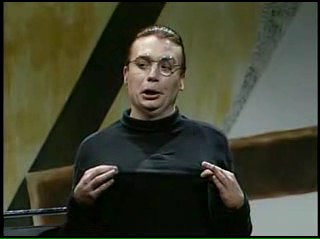 Save my sanity! PhotoShop a goddammed black T or turtleneck on ya!

I hate it when they put it both ways in their own materials… is it Heartsick or HeartSick or even Heart Sick?

Someone just wrap me up and trank me. I’m so far behind in what I want and need to post here, plus I’ve totally lost track of who my Friends are on MySpace.

There I was walking past Borders Books in lower Manhattan earlier this week and there’s this frikkin book splattered big in the window.

Today I’m slogging through a monstrous backlog of MySpace Bulletins and it turns out the author of that book is one of my Friends! 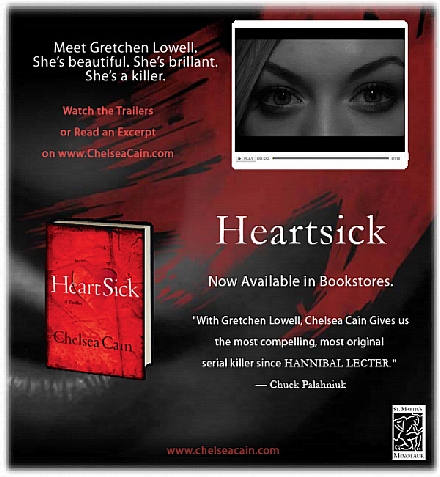 Laugh Of The Day: Raquel Villo

Her MySpace Bulletins are all great, always. This was sent out on the 4th. Today’s the 7th and I’m only getting to it now.

take your time….im only dying.

I guess I’ll have to email back a wreath!

God, I wanted to post this earlier. But Ed Colligan and Steve Jobs have stolen my time this week!

Here is the fantastic good news via MySpace Bulletin:

I feel like I’ve had my brains yanked out my asshole. So tired and worn out. Disoriented. No internet or phone (cell off) for nearly 2 months. With the exception of my mega-movie friend, Dontal, no human contact whatsofuckin’ever.

I don’t think I’ve ever been this exhausted. I feel like I could just fall asleep and never wake up. (And I wouldn’t care.)

But it was worth it, I guess. The book is really something special.

It’s a lot of things: a youngish bohemian tale (of “artists” wanting to make an impact and, of course, achieve fame), a story of alienated non-conformists (so it has a juvenile delinquent quality), a Thelma and Louise (“buddy love” or “girls on the lam”) story, a sexploitation and S/M (and, yeah, femdom) romp, a lampoon of auteur (a.k.a. ego) film-making, a satire of media celebrity and “true-life” tabloid sensationalism. The tone and humor of the novel is somewhat like Running With Scissors or Dry, but told with the bluntness and crude language of Charles Bukowski at his best, with sardonic touches reminiscent of early Chuck Palahniuk. The claustrophobic, downtown, drug-addicted, end-of-the-line feel is a bit like Party Monster. The fatal love these two gals share is somewhat like Heavenly Creatures. And, yeah, I have to emphasize, it’s a comedy, despite its mock-serious tabloid title.

This fucking novel is really the very best work I’ve every done. On a story level, Tarantino on steroids. Bold and demented, totally packed with vulgarity, obscenity, and crazy in-yo-face behavior. Did I also mention it’s an epic tribute to exploitation movies? Especially “Bad Girl” cinema?

I think I also manage to turn my protagonist (one of the two, actually), Dolores — my crazy, Latina, wassup! non-conformist — into a three-dimensional character. That’s one thing that exploitation films don’t do well: add much character dimension. This girl is crazy, but she’s also real.

The full title of the book is: PERMANENT OBSCURITY: or a Cautionary Tale of Two Girls and Their Misadventures with Drugs, Pornography, and Death

Here’s what the novel looked like originally, when I wrote it out by hand (759 double-sided index cards):

This is what it looks like today, as I printed it out: 563 pages + 2 title pages

This is the title page, as I conceived it: white letters on black. (It’s supposed to be a black comedy, after all.)

As you can see, the real author is Dolores. Dolores Santana. I’ve just been a fuckin’ secretary, taking dictation. This bitch rules! Oh yeah, I use the word “bitch” a lot in the book. (Also, “cunt,” also “ho,” also “twink,” also “slut,” but not “heffah.”) Sorry. I am formally apologizing to old-school feminists as of this moment. (It’s how Dolores talks; she made me do it! She might say to me now: “Yo, stop being such a bitch!”)

Congratulations, Richard! I can’t wait to get the published book to read!

Previously in this blog:
Richard Perez Sends Word Of His New Novel
M. Dylan Raskin Returns To His Homeland!
School Shooters Are Weakling Crybabies Who Should Shoot Themselves First And Thereby Help Improve The Human Race
M. Dylan Raskin – Part 2 (of 2)

I love it how the flaks send me frikkin emails saying they’ve read this blog.

A Third Post-iTunes Fable For NBC: Steve Jobs Is Journeyman

Chuck comes through with a leak of Journeyman!

Some clever NBC promotion embedded within it. Today Show when Zucker reigned.

They went Lost-like with the titles. Brief bit of music & series title.

I have to give credit to a brother writer.

Yeah, the director too. (Support the WGA, DGA!) 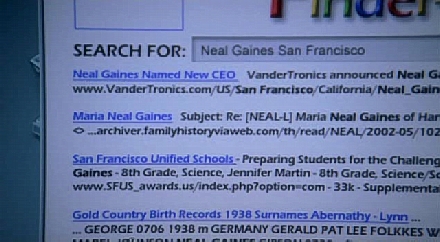 But these next photos explain why NBC cannot beat Steve Jobs. And also how the iPhone came to be. 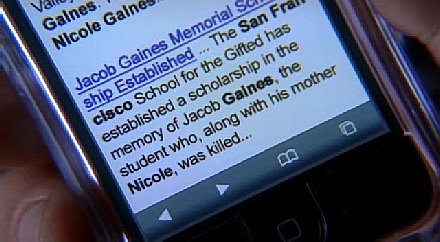 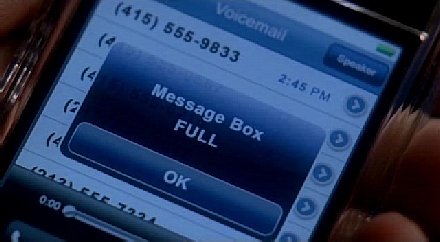 Do you see NBC? You cannot beat Steve Jobs. He’s a Journeyman too. The iPhone is obviously technology he stole while visiting the future. He’s already seen your abysmal and tragic failure with Amazon’s Unbox. He’s already seen Zucker having to resign in disgrace! He’s already seen a near-dead NBC being unloaded by GE to Rupert Murdoch! 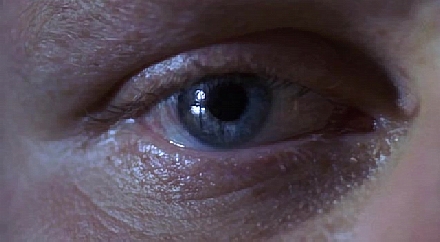 Disclaimer: Publication of these screensnaps is in no way an admission, implicit or explicit, of an illegal act having taken place. In cyberspace, even streamed video can be screensnapped, with no data ever residing in the local computer. Ask your attorneys, Suits. Or even better, ask your Local Chuck — hell, you’re putting on a whole TV series about them!

Previously in this blog: (Zucker)
I Wish I Thought Of That!
By The Book: Jeff Zucker Vs. Steve Jobs
Jeff Zucker: Like Dubya, Only Worse
Newsflash! Jeff Zucker Buys Condo From Dick Morris!
Jeff Zucker: He Don’t Do Emo
Jff Zukr: Ur No Gneeiz No
Quote Of The Day: Jobs Rulz, Gates Luz
A Post-iTunes Fable For NBC
Should Apple Turn iTunes Into A Platform?