Update 12/13/07: NBC did not order more episodes beyond the original thirteen. I guess the creator now has much time to frivol.

Spoilers ahead. Skip this post if you haven’t seen the first episode tonight. It debuts on NBC at 10PM EDST.

After all the hyping I did of Journeyman here, seeing the actual pilot (courtesy of “Chuck” and also Amazon Unbox) was a letdown.

I don’t like the star playing his wife. Let me just come out and day it: She’s a shrike, a bitch, and if I had her for a wife I’d want to travel back in time too! And as for the actress herself, she looks more like a supermodel than someone who’d risk her figure to have a kid. This is bad casting.

I don’t see the appeal of the woman he pines for. All that time he thought she was dead — and she’s not? Did I care? No.

His journeying back in time made no spatial sense. He’d go to sleep in his bed and somehow wind up miles away in a park? Are they going to use earth rotation as an excuse? For that matter, what triggers the time traveling? There’s an inference of either the Hand of God or mental illness being the catalyst. The latter is more convincing than the former.

Is every episode going to involve him intervening in some aspect of the past, in someone else’s life? This reeks of Early Edition. That show had more appealing, more true-to-life, characters — plus a cat!

His initial journey back into the past lacks emotional realism. To understand what I mean, I now have to recount my own “journeyman” episode. It was a dream I had back in 2003 (1/26 to be precise; it’s in my Palm) and it left a permanent mark on me.

I “woke up” standing on the sidewalk looking at a protest marching north near Columbus Circle. It is sometime in the 1970s (I can’t pinpoint the year). I am seeing a protest I had actually witnessed in real life back then. But I am back there with my knowledge of today. And it hits me that I am back there with what I know now. I have traveled back in time. The vividness of the dream, its reality, is as real as real, if not realer (you know how hyper-real dreams can be; if you don’t, I feel sorry for you!). I am there. And I know the future. And all the shit that I’d been through in that future is now gone. Wiped away. I had a sense of freedom, of liberation, that I’d never before experienced in my life. I could do everything differently — and with the foreknowledge I contained inside me. I walked down to a neighborhood I once lived in for a few years. It was pre-gentrified. The rents were still low and I could see the lowlifes who had been swept out in the neighborhood’s redevelopment. They didn’t frighten me. In fact, I was without fear altogether. That I was suddenly homeless and apparently penniless didn’t bother me at all. It was the freedom of it all that excited me. I could get money, I could get an apartment — and beyond all that, I could get rich. I knew the tech stocks to invest in. I knew that Microsoft was still a private company. There was no DOS yet. No IBM PC. Reagan wasn’t yet in office (and when he came in, I’d know there’d never be a nuclear war with the Soviets — something many people actually feared during that time!). Do you understand? Can you imagine it for yourself? How absolutely exciting! To this day — over four years later! — all I have to do is recall that dream and I can recapture some of the emotion of it.

Journeyman lacked that. Instead of seeing his life having a new, fresh start, instead of feeling the emotions that would accompany that — we get nothing. A search for shoes in his old (not-his-yet) house. And even then it almost takes a baseball bat to the head for him to realize what has happened. Even if he thought it was a vivid dream, there are things he could have done other than what the writer chose. 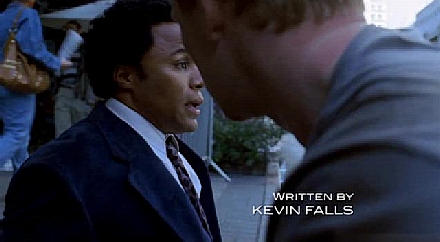 This is bad writing. Very, very bad writing. Characterization was pushed aside in favor of plot. A possibly fatal mistake. With the rare opportunity to grab the audience and make them experience such a trip, to really feel it, the writer flubbed it.

In this respect, I think many people who’ve read The Time Traveler’s Wife and watch the show for the first time tonight will feel right at home. It’s as arid and as shallow as that book. It even has an element from that book: the character time-traveling while driving, causing an accident! Strange coincidence, huh?

I’m not sure if I’ll tune in for the second episode.

If you watch it and like it, visit The Journeyman Blog.

This entry was posted on Monday, September 24th, 2007 at 2:39 pm and is filed under crankness, sf, shitness, television, The Real Life, writers, writing. You can follow any responses to this entry through the RSS 2.0 feed. Responses are currently closed, but you can trackback from your own site.

2 Responses to NBC’s Journeyman: Thumbs Down