I never thought I would write this.

And it has to appear here.

Because it’s about Girls Don’t Cry.

They no longer exist. They’ve disbanded. 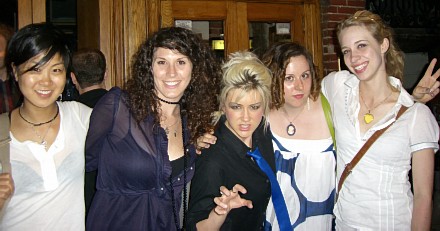 Having failed to hold a job, and now fast becoming a failed student, there was increasing tension at home. When his father discovered he had been writing stories on the typewriter they bought to help with his college work, Henry tossed the manuscripts, the typewriter and his son’s clothes out onto the lawn. Bukowski took $10 from his mother and caught a bus downtown where he rented a room on Temple Street before moving to a ‘plywood shack’ on Bunker Hill. He dropped out of college soon afterwards, In June, 1941, and, after working manual jobs for six months, in the Southern Pacific railroad yards and at the Borg-Warner factory on South Flower Street, he set out to explore America so he could write about ‘the real world’ of rooming houses, factory jobs and bars, like John Fante.

He caught a bus to New Orleans and worked in a warehouse there, saving his money until he had enough to quit the job and pay his rent in advance so he could stay in his room all day and write. When he ran short of money, he tried to live on candy bars to postpone getting another ‘eight-hour job of nothingness’. The only friend he made in New Orleans was a near-senile old man, and the only place he went was a depressing bar near Canal Street, ‘the saddest bar I was ever in’ as he wrote in his poem, ‘drink.’

In Atlanta, Georgia, he lived in a tar-paper shack lit by a single bulb. He was still trying to write, but the stories kept coming back from the New York magazines and he allowed himself to starve rather than get a regular job, believing that writing would save him, like the deluded hero of Knut Hamsun’s Hunger, another favorite novel. Atlanta was the nadir of Bukowski’s time on the road, almost the end of him. Sick with hunger, he wrote to his father asking for money and, after getting a long letter of admonishment by reply, he considered committing suicide by touching a live electric wire. Then he noticed the blank margins on his newspaper and began writing in them. Looking at his life in retrospect, he said this was the moment that proved he was a writer. Although nobody would ever read what he had written, he felt compelled to scribble something.
— Charles Bukowski: Locked in the Arms of a Crazy Life – the biography – Howard Sounes

I read somewhere that someone once said that in order to make one’s living in any field of creative endeavor one had to be almost psychotic. You have to believe in yourself so strongly, to sit there day after day with your computer or your pen or your piece of paper or guitar, and think “I can do this. 999 billion people before me have failed, but I can do this.” It’s quite a psychotic state of mind to have to hang onto year after year. It takes years. Nobody does it overnight.
— interview printed in the eBook, “The Reality Break Interviews: Volume #0” – Dave Slusher

If you are going through hell, keep going.
–Winston Churchill

This entry was posted on Saturday, December 8th, 2007 at 7:02 pm and is filed under bands, girls don't cry, greatness, legends, music, video, youtube. You can follow any responses to this entry through the RSS 2.0 feed. Responses are currently closed, but you can trackback from your own site.